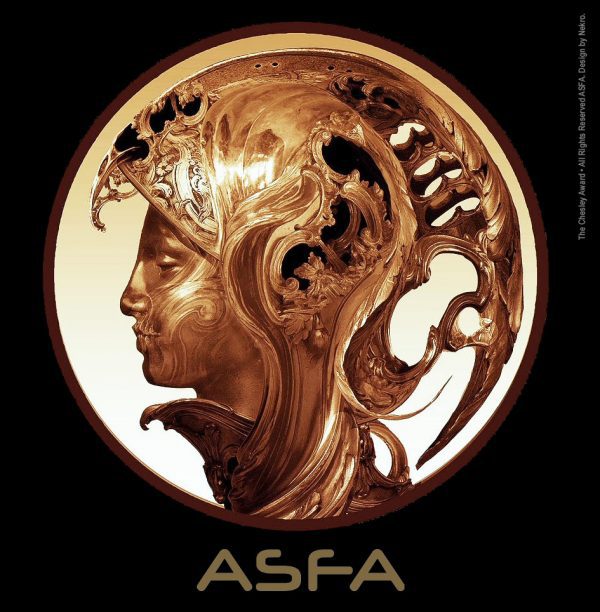 The Association of Science Fiction and Fantasy Artists (ASFA) is proud to present the new design for the Chesley Award — ASFA’s annual award celebrating the best works in science fiction and fantasy illustration, as voted on by artists and art fans. The organization commissioned internationally-renowned artist Nekro to create the new design, with initial art direction from current President Sara Felix. “We were looking for a modern interpretation of the muse that propels all artists forward. We thought Nekro would be the perfect choice to craft an inspired take on the goddess Athena who symbolizes wisdom, war, and the arts. He delivered in spectacular fashion,” says Felix.

The final sculpt of Nekro’s work will hereby become the branding identity of the award. The reveal of the final physical sculpt will be forthcoming as a 3-inch medallion, awarded to all Chesley winners starting this year.

The Chesley Awards were established in 1985 as ASFA’s peer award to recognize individual works and achievements during a given year. They were initially called the ASFA Awards, but were later renamed to honor the famed astronomical artist Chesley Bonestell after his death in 1986. The Awards are nominated and decided upon by members of the Association of Science Fiction and Fantasy Artists.

ASFA Membership is available here. The Suggestion List for the Chesley Award is annually assembled by both ASFA members and non-members of the SFF art community. However, nominations and final votes are made by ASFA Members only.

Stay tuned for the announcement of the 2021 Chesley Award Ceremony and its all-star presenters!

Visit the ASFA website for more information on the Chesleys and ASFA’s mission of community and artist outreach.